RailRoad Crossings of the South

I’ve dared to ride solo going to Bicol four times so far and I found myself gearing up for the fifth one that early July morning. As usual, I plan to take the Maharlika Highway from Laguna to Albay. Aside from the usual potholes and roadworks, it is a relatively safe route to take even for a newbie. Perhaps one hazard that makes these roads more dangerous are the railroad crossings. On this journey, I will focus on these crossings so you’ll know where they are.

Just how many are there? Let’s count ‘em!

The RR Crossing is located at KM post 82, two kms after SM San Pablo. It is perpendicular to the road so it’s fairly easy to cross but since it is elevated a few inches off the road, you really have to slow down. Anyway, you wouldn’t really be going too fast before the crossing because it is in a commercialized area. Besides, the ashpalted road before and after the tracks is in bad condition that really makes you focus more on where you’re going.

2. Lalig, Quezon Crossing
After another 10 kms is the Lalig RR Crossing at KM post 92. It is 1km away from Hacienda Escudero just after the Quezon Province boundary arch. There are warning signs in place and the road is in good condition so it’s fairly easy to cross. 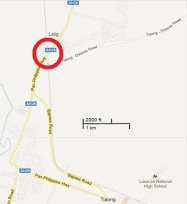 3. Cadelaria Crossing
This is perhaps the most dangerous crossing you would encounter. The reason is obvious – it cuts through the road at an angle. What’s the big deal? We’ll, nothing if you’re on four wheels. But to a motorcycle, a slippery metal raised 2-3 inches off the road is potentially dangerous (especially at this angle).

This is located at KM 105 just after Puregold Candelaria. There are warning signs in place so please pay attention. Try to cross the tracks as perpendicular as you can. 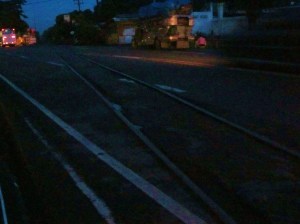 You can avoid this through the Candelaria bypass road (KM 104) which is 7.5 kms of cemented spacious road (1.5 kms longer than the normal route). You can avoid the dangerous crossing in the town proper but you still have to make a railroad crossing some 6.3 kms into the bypass road. At least it is a fairly easy crossing. 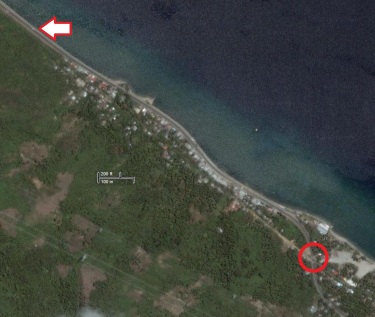 Just a kilometer away from the Gumaca Fish (arrow) and waiting after a blind curve is this crossing. I flew over these tracks the first time I crossed it and almost lost control. There are warning signs but it’s placed on the inside of the turn and after the curve so you won’t see it right away.

The town proper of Gumaca is “infested” with 3 crossings 1 km apart from each other. The three are almost identical with their condition: cuts the road at a slight angle, tracks are elevated a few inches the road, and road condition is very poor. It’s in the town proper so traffic builds up so you won’t have to worry about your speed. 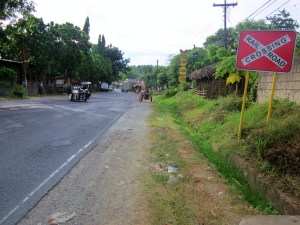 8. Calauag Crossing
Some 2 kms away from Calauag proper is another crossing coming off a turn. It’s not smooth sailing over the tracks so you must slow down. This is at KM 232.

There isn’t another RR crossing until Naga City (KM 430+). There are different routes you can take but you would still need to cross the tracks at least once. Don’t worry the tracks are relatively easy to cross.

This one is just before the Buhi-Nabua junction in Baao at KM 465. As long as you slow down, you should be OK. 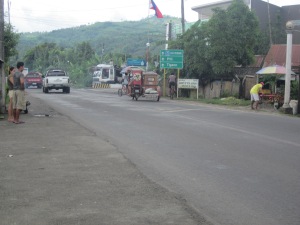 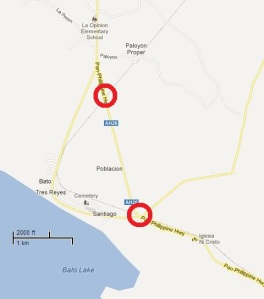 KM 475
The tracks are barely there. If not for the warning signs, you won’t even know it’s there because it is levelled to the open ashpalted road. If you don’t notice the signs, chances are, you would be going fast over the tracks. You should be OK as long as you don’t panic.

KM 477
This crossing joins with the crossing of the the Highway and Bato Proper. It’s a busy crossing so slowing down is a must. The road is also in bad condition.

So there you go, a dozen Railroad Crossings in total! There’s still another one in Guinobatan and probably (depending on the route) in Daraga or Legazpi City but so far the PNR service is only up to Ligao City so the tracks has been covered by ashpalt since they are not in use so you won’t have to worry about them.. for now at least. 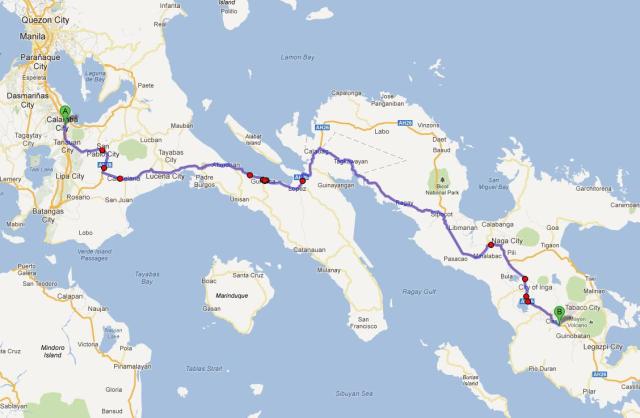 The conditions might vary with each RR crossing but as long as you treat it a road hazard and maneuver over it cautiously, you won’t have any problems. STOP, LOOK and LISTEN!

The rider is a 20-something Filipino that rides a Honda Wave 125cc underbone. He knows little about motorcycles yet loves the experience going places on two wheels. Rider Ako is a motorcycle-slash-travel blog. The rider not only shares to you travel destinations and what to see there but also the experience of getting there. You will read about the thrills and adventure when he rides solo, the romance of riding in tandem, the camaraderie riding with a group, the excitement participating in events, and anything that he thinks you might find interesting.When he's broke and the fuel's empty, he will share stories about motorcycling how he sees it through his helmet visor.
View all posts by Dom de la Torre →
This entry was posted in Rides, Solo Ride and tagged Bicol ride, Calauag, Candelaria, Gumaca, motorcycle safety, PNR, railroad accidents, railroad crossing, railroad crossing safety, railways, riles, solo ride, trains. Bookmark the permalink.

3 Responses to RailRoad Crossings of the South