The Coastal Roads of Batangas City

Batangas City is the capital of the province of Batangas and is known as the “Industrial Port of CALABARZON” (CAvite, LAguna, BAtangas, Rizal and QueZON).

Last Friday, I went to Batangas City after work. I didn’t stay for long because I also needed to attend to something in Lucena City. I have already pre-plotted my route in Google Maps but a one-way detour forced me to take a different route. I knew right away I’m heading the opposite direction when Batangas Bay came into view. I’m off course and I’m not doing anything about it…

The yellow highlight was my planned route but I ended up taking the red one.

I have seen this route in Maps before and I know that it will put me back on track after an extra 80 kilometers. It’s already 4 o’clock in the afternoon and somehow, my brain translated that as “beautiful sunset” and not as “scary, isolated roads in the dark”.

A refreshing drive into the coastal roads offers a view of Batangas Bay.

Although the road is well-paved and in good condition, trucks for the different factories in the area crowds the 2-lane road. 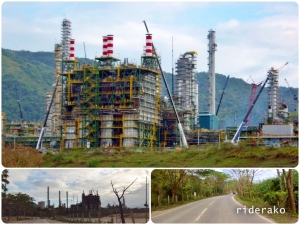 some more industrial facilities or machinery along the way. 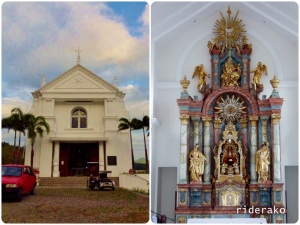 Sto Nino Church on top of a hill.. it offers a bird’s eye view of the Verde Island Passages.

and of course, Verde Island itself.. 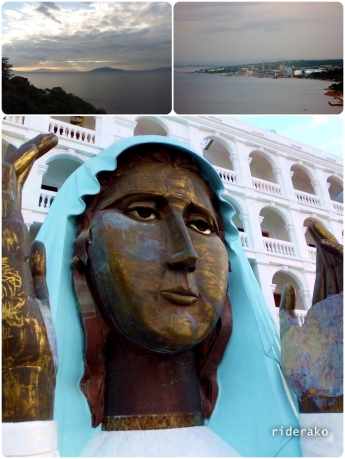 A small access road on the cliff leads to the Sanctuary with a huge image of Mama Mary on its walls facing Puerto Galera.

At this point, I do not have any idea how far I am from a familiar road and it is already 05:30 PM. It is not advisable to be out on unfamiliar route by sundown so hurriedly left. There was a steep downhill that probably put a lot of weight on the front tires that I felt it “soften”. Just two hours ago, it was also deflated.

The reddish gooey substance is my tire sealant oozing out when the tire got too deflated earlier on this trip.

If it’s any consolation, the new rear suspension I had earlier that week was working like a charm. 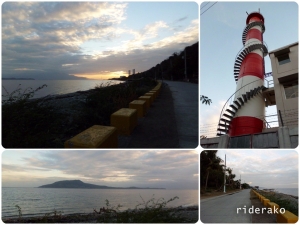 Sunset in Brgy. Ilijan where Verde Island is also visible. 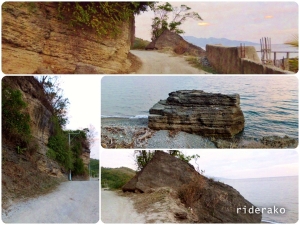 some awesome rocky stuff near the shore..

Inevitably, darkness caught up to me just as I was making my way through the mountainous part of Lobo. In the dark, I was completely disoriented. I have no idea where I was or where I’m heading. Then a Kilometer Post showed Batangas City being less than 30 kilometers away. I’m circling back to where I came from!

Locals pointed me to the right direction as I made my way thru Taysan to Rosario. The barangay roads were rough, dark and unfamiliar. It was already 7 in the evening. I interrupted a family’s dinner to have my tire inflated. Their vulcanizing shop was already closed but Tatang was patient enough to fire up the air compressor. Thank you, Tang! He didn’t even charge me for it. I was only able to pinpoint my location when I came across some signs and the Batangas Racing Circuit.

From San Juan, Batangas, I made my way to Candelaria then Sariaya, and finally, Lucena City. I did what I came to do then left by 9PM. Then, there was 100 kms more to cover going home. I was home by 11:30 PM.

This accidental quickie ride was done on a whim and I had less time to explore the coastal areas of Batangas City. I know Malabrigo Lighthouse is just somewhere beyond Ilijan and I also saw a sign pointing to an Ilijan Falls. I’ll definitely come back! You have anything to add? Let me know in the Comments!

The rider is a 20-something Filipino that rides a Honda Wave 125cc underbone. He knows little about motorcycles yet loves the experience going places on two wheels. Rider Ako is a motorcycle-slash-travel blog. The rider not only shares to you travel destinations and what to see there but also the experience of getting there. You will read about the thrills and adventure when he rides solo, the romance of riding in tandem, the camaraderie riding with a group, the excitement participating in events, and anything that he thinks you might find interesting.When he's broke and the fuel's empty, he will share stories about motorcycling how he sees it through his helmet visor.
View all posts by Dom de la Torre →
This entry was posted in Quickie, Rides, Solo Ride and tagged Batangas, Batangas Bay, Batangas City, chapel on a hill, Ilijan, industrial port, Lobo, Miraculous Image of the Infant Jesus of Prague in Czech Republic, motorcycle, philippines, places to visit in Batangas, Sanctuary, St. Mary's Sanctuary, Sto Nino Chapel, Verde Island, Verde island passages. Bookmark the permalink.

4 Responses to The Coastal Roads of Batangas City