I visited Sadanga to see Bekigan and Focong Rice Terraces. I thought I have accomplished that when I toured the sloped roads of Brgy Poblacion. Turns out, that was only Bekigan. If not for a fellow motorcycle rider, I would not have known of Sacasacan and the Focong Rice Terraces it is hiding high up on the mountain. Sacasacan is one of the 8 barangays of Sadanga, Mountain Province. Getting there was not easy at all.

They were paving the road with concrete which should be a good thing when it’s done but while it was still on-going the road was in pretty bad shape with all the construction materials dumped everywhere. So after the most grueling 100-meter climb I ever did on a motorcycle, I was stumped on my tracks as the road was blocked with a mound of sand and gravel. It seems the only way over it was to TRY to cross it where it was lowest. But there’s a catch..

The catch is that the lowest portion happens to be only a foot away from the edge of the mountain. The cemented barrier might offer a little comfort that somehow something is between the road and the cliff, but it won’t do a motorcycle any good.

I wanted to turn around. I don’t care if I struggled going up here and end up struggling even more downhill. It’s unfortunate I will miss the Focong Rice Terraces but sometimes, that’s just how things are. Then I remembered the proud Sacasacan resident who forced me into this predicament. I imagined how he would be surprised I’m back so soon and how he would be so persistent I go back up here and give it another try. That would be more stressful. Haha! I revved the engine a few times, took a deep breath, closed my eyes, the hit the throttle. When I opened my eyes, I was on the other side! Yaaayy!!

The road from here on out was surprisingly in excellent condition. It was still a roller coaster  ride of course but it’s manageable. I continued for 2 kilometers until there was no more road. It ended on a basketball court in front of the barangay hall. And there it was…

Focong Rice Terraces! It looks a little different because it is as high as the view point. Rice Terraces are more picturesque if you’re on an elevated vantage point because you get to see the wavy ridges better.

This is overdoing it but yeah, something like an elevated view is ideal.

What I was amazed at is how it survives in the highlands. The whole mountain has been “terraced” almost up to it’s summit. Where are they getting the water for such a vast agricultural land? It only shows  how well the Igorots understand this craft.

I was told that Focong was not at it’s best during my visit because they have just finished harvesting the crops. They encouraged me to return during the rainy season.

There were portions of the terraces that are lower than the view point. 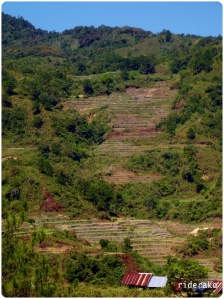 ..but most where way up there. So high, it’s almost like a stairway to heaven.

A shed in the middle of the terraces.

A woman who obviously has some sort of  government position requested I sign in their tourist log book but couldn’t find the key to the barangay hall. She summoned a few people to look for  whoever has the key. She begged that I wait so I chatted with some of the residents as I seize the opportunity to eat a light breakfast.

This old man looked interested in the motorcycle. He pretended he doesn’t care when I noticed. I would’ve offered to take him for a spin.

I was almost ready to go but they still don’t have the key. I waited a little longer until they found the key. I gladly signed the visitor’s log. I find it weird that it was important.

There would be mini-rice terraces every so often and this one really caught my attention.

Sacasacan is not only good for viewing Focong Rice Terraces but Bekigan too. Of course, that includes Sadanga  Poblacion and Brgy Belwang. In fact, the view here is better. 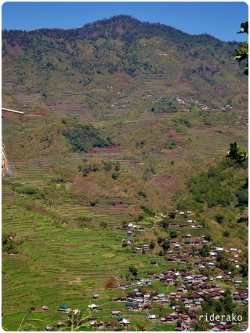 I told you they were growing houses on Bekigan Terraces.

Some were just simple huts but others were bungalows!

a portion of the Bekigan Rice Terraces viewed from Sacasacan

On top of a hill I spotted a school. The steep zigzag road leading up to it looked fun. 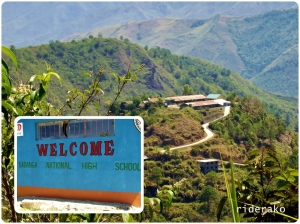 I guess you can say that education here is top-notch

That’s some very serious “hiking” the kids do in the morning. 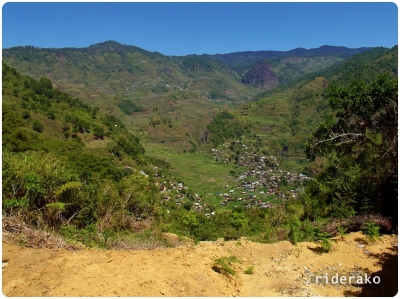 If you want to cut class, you can base jump from here and glide back to your house below.

There were some kids playing basketball and while I got them distracted by the motorcycle, I grabbed the ball and took the shot beyond the arc. Like a pro, I kept my arm up after the follow through as the ball sailed towards the basket. It fell short. Way short! I was so embarrassed, I left right away. Haha!

And then, here comes the return trip. Ahh, this is going to be nerve-racking. 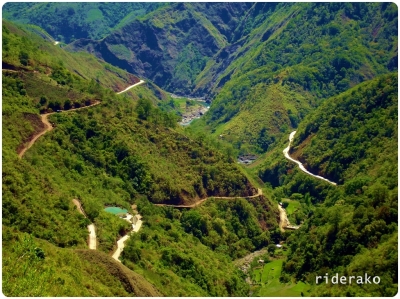 No wonder Sacasacan was used by the Americans as a lookout post against the Spanish forces.

When I got to that problematic 100-meter rough(est) road, I literally inched my way down. I would secure a foothold, let go of the brakes, and let it roll then secure a foothold again. On the third time, I failed to secure my footing and even with the brakes engaged I kept rolling. I let go of the brakes, and raced against a few stones rolling alongside me. I spotted a decent path without much gravel and stopped safely after a few meters. 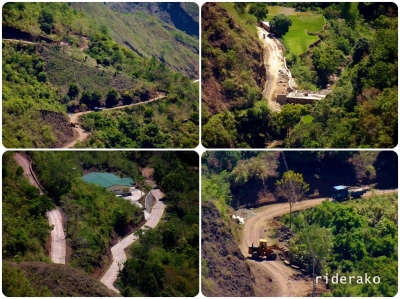 Slowly but surely, I was able to negotiate (surprisingly well, if I may add) the problem areas on the way down. Sometimes, I question the “Yield to Uphill Traffic Rule”. 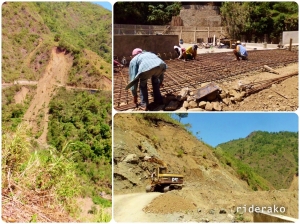 back on the main road.

It was almost 11AM when I got back on the main road. I wanted to pick up the pace a little but the road kept forcing me to slow down. Plus, another UNESCO (World Heritage) rice terraces is beckoning. 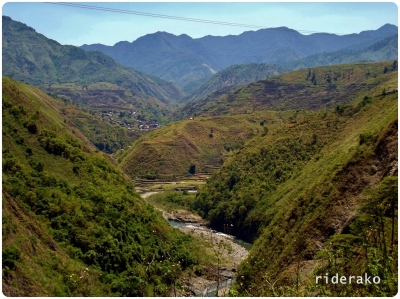 HELP!! The mountain spirits are enticing me with magnificent views I am forced to stop again and again. They won’t let me leave the Cordilleras!

The rider is a 20-something Filipino that rides a Honda Wave 125cc underbone. He knows little about motorcycles yet loves the experience going places on two wheels. Rider Ako is a motorcycle-slash-travel blog. The rider not only shares to you travel destinations and what to see there but also the experience of getting there. You will read about the thrills and adventure when he rides solo, the romance of riding in tandem, the camaraderie riding with a group, the excitement participating in events, and anything that he thinks you might find interesting.When he's broke and the fuel's empty, he will share stories about motorcycling how he sees it through his helmet visor.
View all posts by Dom de la Torre →
This entry was posted in Long Ride, Rides, Solo Ride and tagged adventure, Bekigan Rice Terraces, Cordillera, Focong Rice Terraces, motorcycles, mt province, philippines, Sacasacan, Sadanga, travel. Bookmark the permalink.